Just yesterday, I took a rather fun Segway ride around the Hotel Concorde in a hilarious attempt to experience one of these contraptions for myself. I didn’t fair too well and would definitely need more practice before taking to the streets again. 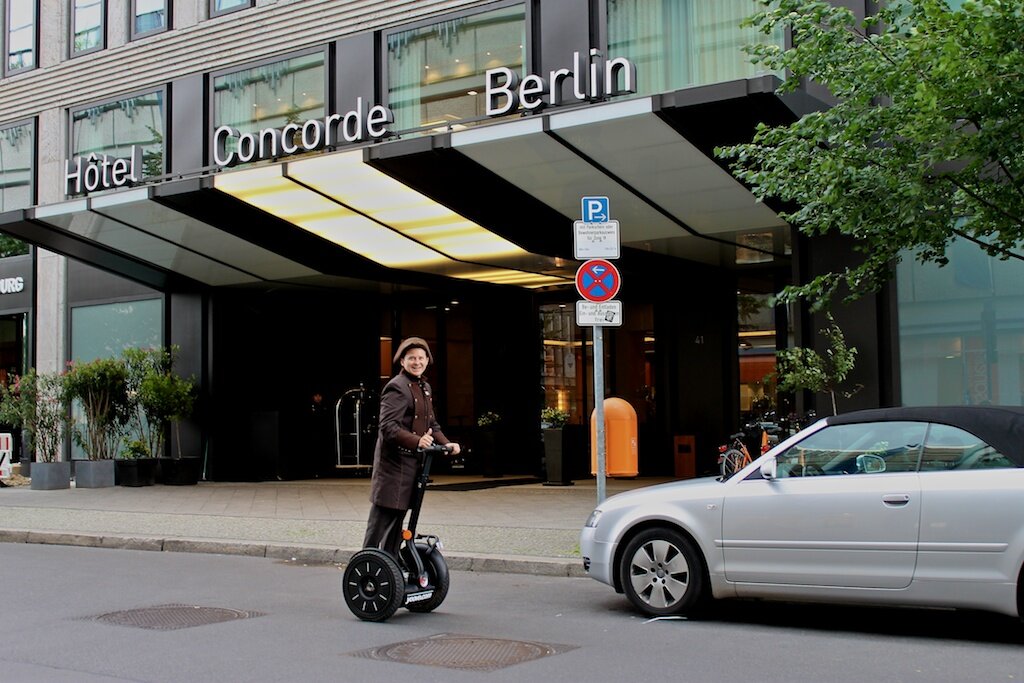 Hotel guests can rent Segways by the hour and use them to explore nearby Kurfurstendamm or even other parts of Berlin. It’s a great, environmentally friendly alternative to driving a car as the segways aren’t charged by batteries or gas but electricity and can easily be re-charged whenever stationary.

Just so long as you have your driver’s license and are at least 18 years of age, you’ll be permitted to rent a segway. You can drive them on the streets, using the bike lanes only. When there are no bike lanes available, you’ll need to use the sidewalk instead.

The hotel provides all needed accessories such as helmets or lights if you happen to be riding at night. As one of the bell boys explained, there are some things that you need to know before you go. If you’re inexperienced like me, you’ll need to have a preparation session in order to learn about how the segways function.

The key is balance.  After you get on the segway, it mirrors your body’s movement. If you move to left, it moves to the left and if you move to the right, it turns to the right. To build up speed and momentum, simply lean forward and you’ll be off to the races at speeds of up to 20 KM’s per hour. I was surprised to learn that the segway does not have brakes and begin to slow down whenever you lean back.

If you are able to master the controls of your segway, you can go off on your own or even take a guided tour offered by the hotel.

Our bell boy recommends his favorite segway ride along the historic Straße des 17. Juni, where you’ll pass by famous landmarks like the Victory Column and Brandenburg Gate or a ride along any bicycle path that follows the Spree. Both can easily be reached within 20-30 minutes by segway.